California Governor Jerry Brown signed a bill that set the strictest antibiotics standards in the United States for the use with livestock production from chickens to cows. This bill will go into effect in 2018, so livestock production farmers have time to adjust to the new requirement. The new law bans it use of growth promoters to make the animals fatter, so the California Department of Food and Agriculture tracks the information on drug sales and usage, drug resistant bacteria, and livestock management practices.

California being known for their leadership in public health and environmental issues comes from the overuse of drugs that is contributing to life threatening infections from drug resistant bacteria that are called “superbugs.” Animals can carry harmful bacteria in their gut, so when antibiotics are given to the animals the antibiotics kill most of the bacteria in their gut and only resistant bacteria survive and grow. The resistant bacteria can be spread via multiple routes such as animal products, produce through contaminated water or soil, prepared food through contaminated surfaces and the environment when animals poop. People can get sick with resistant infections from contaminated food and the environment so take precaution to prevent food poisoning. The US Center for Disease Control and Prevention (CDC) estimates that 2 million people in the country are infected with drug resistant bacteria each year and at least 20,000 cases lead to death. Some infections are mild illnesses and some are deadly. About 1 in 5 resistant infections are caused by germs from food and animals. Be aware and understand about antibiotic resistance and food safety to protect yourself and your family from those infections. 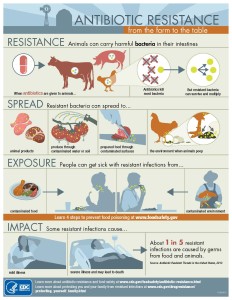